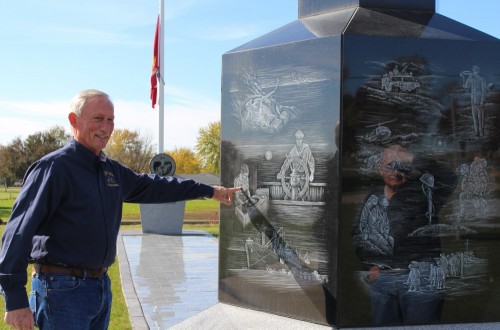 Over the last decade, the people of DeWitt have come together in support of their veterans. Donating labor, concrete, construction equipment and even property came as second nature to the community when the DeWitt Memorial Veterans Inc. announced plans to improve a vacant lot and build an impressive monument on the north side of town.

“I felt there was a need in the community to recognize the service of people in the military, regardless of when they served,” said Mike Osmun, who organized the group in 2008. Osmun is a Navy veteran who served aboard a destroyer escort and was based in San Diego from 1972 to 1975. The four other board members, who have stuck with the project from its beginnings, are Navy veteran Bob Rands, Army veterans Verlyn Scheckel and Rich Dunkin, and Air Force veteran Steve Mosier. The project was advised by Bob Hansen, former owner of Hansen Monuments, who served the Marines in Camp Pendleton and 29 Palms from 1956 to 1960.

The City of DeWitt donated the property where the new monument would be located. Though they had to wait five years for truckloads of fill to settle into the landscape before they could begin building, the DeWitt Memorial Veterans Inc. started fundraising straightaway. That patience paid off, and the monument Osmun envisioned now stands proudly on the site.

A central granite pillar is ornately etched with images unique to each of the five branches of the U.S. military, and paved spokes radiate outward to connect each side with a stone service marker and flag for that branch. The pavers on these five paths bear the names of DeWitt area veterans. Paver sales were one of the many ways funds were raised for the construction of the monument. Grants were written, and donations started rolling in as the community embraced the project.

“I had a gentleman ask me how much the service markers cost. They’re not cheap,” said Osmun. “He sat down and wrote me out a check for two of them on the spot.” Others purchased flag poles or shrubbery, volunteered their time and offered professional services.

Pat Henricksen, executive director of the LincolnWay Community Foundation, worked with Nancy and Wayne Stuedemann to establish the Stuedemann DeWitt Veteran’s Memorial Endowment Fund for annual maintenance at the two-acre site. “Nancy and I were more than impressed with the outpouring of volunteer efforts and donations that allowed the DeWitt Area Veterans Memorial to be constructed at such a magnificent level of scale and quality,” said Wayne Stuedemann. “It is a fitting tribute to all of our area veterans and honors the significant sacrifice given in service to their country in order to preserve our freedom.”

Impressed by the outpouring of support for the DeWitt Veterans Memorial, Nancy and Wayne Stuedemann established an endowment fund to ensure long-term care for the two-acre site. "The memorial is a fitting tribute to all our area veterans and honors the significant sacrifice given in service to their country in order to preserve our freedom." 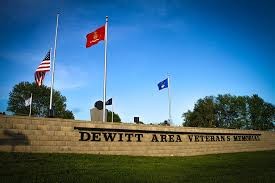 For Verlene Reid, the dedication of the DeWitt Area Veterans Memorial had a little deeper meaning.  Her son, John, was a Navy corpsman in Vietnam - one of the more than 58,000 Americans to die in the war.  His name is inscribed on one of the bricks in the Navy section of the memorial. And when Mike Osmun, president of the monument's board of directors, officially dedicated it, John Reid's was one of two stories he told about soldiers from DeWitt. The other was William Mayes, a Civil War soldier who was awarded the Medal of Honor.

"I followed (the building of the monument) pretty closely," Reid said after the dedication. "It's wonderful, not just for me - the community." And if the entire dedication was emotional, for Reid the emotion carried a special impact. "It always brings a little tear," she said with a sad smile. "But I know he's in a good place and I'll see him."

The monument was intended to honor not just the fallen who died in spectacular events, but those who still live with us today. Retired Navy Capt. Clyde Bradley said that for veterans, the monument could be a healing place. "This is where we can leave many of the burdens we carry every day," he said. 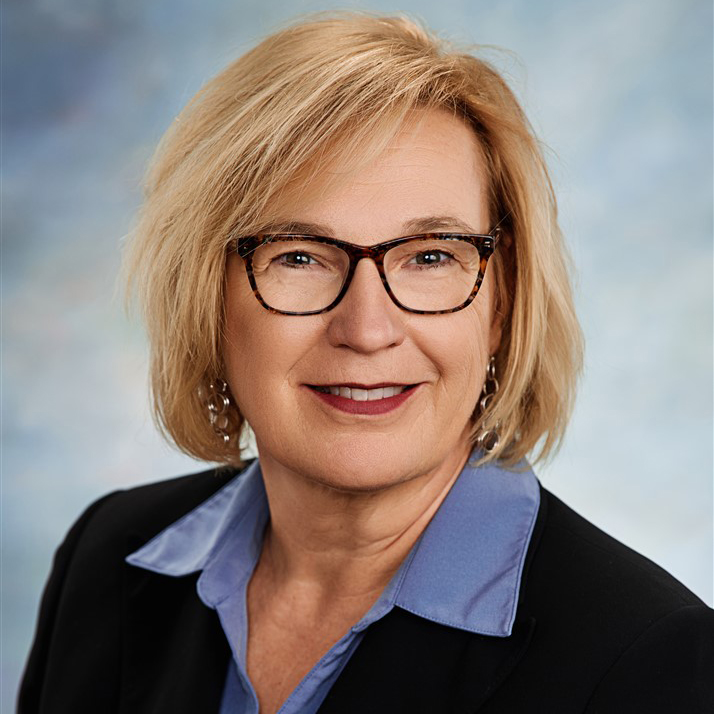